Web Directions South has just wrapped in Sydney, but while I wait for the shower in our hotel room to be free I figured I should record a few rapidly fading memories.

Having attended last year's Web Essentials 05 as a vicarious observer, getting to contribute to the conversation this year as a speaker alongside the inimitable Cameron Adams was a huge treat. 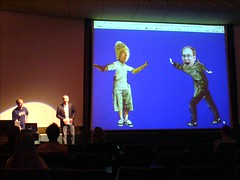 Despite a flaky Internet connection, our talk, JavaScript APIs & Mashups: Work You Don't Have To Do, brought the house down thanks to a few generous helpings of serendipity and the nimble photography of one Lucas Chan that led to a photo taken early in our talk making a cameo appearance onscreen moments later.

Thankfully, I managed to distance myself from the topless rivalry between Cameron and Jeremy Keith this year, but I may have to revise some of the privacy settings on my Flickr account if I'm invited back next year (not that lack of evidence was a deterrent for the resourceful Cam).

My deep and sincere apologies to the family and friends of the moth that I killed during the presentation. If it's any consolation, I suspect I will be living down the phrase "Ooh, a moth!" for several years to come.

Thanks, Priscilla, for being such a good sport when I dragged you up on stage to test your humanity with HotCaptcha. Take pride in having failed!

Amazing people aplenty at the conference, and it was a privilege to get to exchange thoughts and banter with so many of them: Molly, Andy, Derek, Jeremy, James, Gian, Laurel, Thomas, and the many readers of SitePoint (new and old) at the closing night party (yes, even those that were just after free drink cards)... I am truly overwhelmed.

It's 3.15am. I catch a flight to Spain with Molly and Andy in exactly twelve hours, and I still have a newsletter to write. Perhaps I'll skip the shower and get straight to bed.